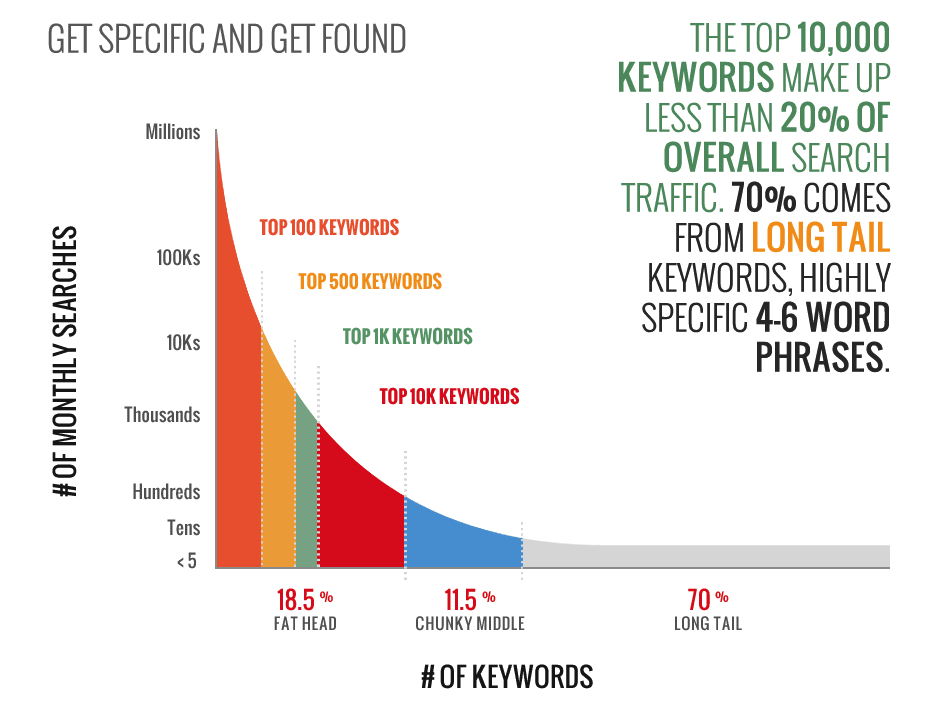 Choosing highly-searched keywords for SEO involves a little research and a lot of thinking like a potential customer or client.  Some keywords are simple and involve the most basic search terms relevant to your website.  However, these keywords tend to have high competition and will not always bring in customers relevant to the specifics of your business.  For example, a bakery specializing in unique, vegan cupcakes would benefit more using long-tail keywords such as “vegan chocolate cupcakes city, state” instead of “cupcakes city, state.”  The long-tail keyword brings in traffic searching specifically for vegan cupcakes, and since vegan cupcakes are not something all bakeries offer, the likelihood of someone visiting your shop for those exact vegan chocolate cupcakes is high.  Being found on Google is difficult when search results are overcrowded with not quite relevant websites.  Bringing in relevant traffic is key to return on investment.

Psychologically, long-tail keywords bring in customers who are closer to point of purchase and more likely to bring in a return on your investment.  For example, their search may have begun at “cupcakes city, state” and morphed into “vegan chocolate cupcakes city, state” as the customer realized they were not finding exactly what they were looking for with their basic search.  For a while, cupcakes were all the rage and bakeries specializing in the individual desserts were popping up all over.  It wasn’t enough to focus SEO on “cupcakes city, state” because competition was fierce and ranking highly was tough.  Long-tail keywords have less competition and it is easier to rank with them. They also bring in customers who are more likely to make a purchase and increase profits.

A TOTAL PACKAGE OF

A professionally built web site is no longer a luxury for serious business people, but a necessity. Quality Web Design puts your business’ best foot forward and shows potential customers that you care about the quality and professionalism of your visual identity. All Red Room custom web sites are built tailor fit for you. There are no cookie cutter templates around here.

Logo Design is one of Red Room’s top skills. A great logo design can mean the difference between someone taking your business seriously, or laughing you out the door. Every great business deserves a great logo that portrays to a customer the look and feel of what you’re about. Let Red Room develop a seriously sweet logo and branding package for you.

Graphic Design including printed goods, promotional items and much more are another major service we offer. All printed goods are designed, proofed, and sent off to the printers in house. General graphic design plus business cards, brochures, stickers, folders, letterhead and much more can all be done under the same roof as your web design, logo design, and online services.

Search Engine Optimization, or SEO, is a big business for those who want to use the world’s largest information base – the internet – to their advantage. Having your site rank on top of online search results is worth a lot of new business. Gain more potential customers, more leads, and be more visible online through our SEO services. Make your web site work for you!

At Red Room, we pride ourselves on outstanding image quality. Our web design and branding customers have the option to utilize our in-house photography service to enhance their design projects at a fraction of the cost of hiring a freelance photographer. Rest assured our photography services are absolutely top-notch with the highest end equipment available.

Private Cloud…sounds complicated, but it isn’t. Don’t you ever wish your small business or sales team could have its own online system that allowed you to collaborate effectively across all devices, anywhere in the world? What about simple sharing of large files with customers on a secure and privately hosted cloud environment branded to match you? We’ve got just the thing.